Metaphor “Mvula’s artwork and personal life is influenced by his early experiences in rural Namibia” states dr. Meredith palumbo in an introduction for his catalogue identity. She further goes on to state that “Mvula’s subject matter references his rural roots and includes depictions of cattle, traditional objects, african dress and the landscapes of northern Namibia.” (palumbo, 2008:4)

This is visible in this exhibition that showcases his body of work over the last ten years. Mvula’s continued interrogation into the figure of the cattle has highlighted its ability to be a metaphor for the society. In the Oongombe installation that is made up of 35 stone sculptures, representative of the heads of cattle was created over the period of a year.

Mvula labored to create impactful work that can be read as a metaphor for the Namibian people. He says “head is part of the body; head is someone in charge of leading (a group), head is the place of our mind and your mental abilities.” The heads have the ability to represent numerous things and “my intention is to have a massive production of heads of cattle, with my physical forces” Mvula   hopes to use the large installation to symbolise the Namibian nation as a herd that move together and when one disrupt the flow eg. Not following road safety rules he can put the rest in danger.

Alpheus Mvula is an accomplished Namibian artist specializing in sculpture and printmaking. He was born in 1972 at oyovu village in northern Namibia. As a young adult he relocated to windhoek to pursue a career in art. He started at the John Muafangejo arts center between1994 and 1999, he then went on to obtain a diploma in visual art from the college of the arts (windhoek, Namibia). The artist did not end there he attended the university of Namibia and later obtained a diploma in printmaking and sculpture from the university of the arts Bremen, Germany. Alpheus Mvula   has had numerous solo exhibitions and took part in numerous group shows. His works form part of the collection of national art gallery of Namibia and mal-art in wesel. He has been exhibited in countries such as: united kingdom, united states of America, Canada, Finland, Norway, Switzerland, Germany, Sweden, Poland and Denmark. The exhibition will be on at the national art gallery of Namibia from 9th may -22nd june 2019 in the main gallery. 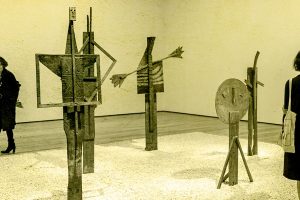 EXHIBITION: ON THE BRINK

EXHIBITION: OF THE GREATNESS OF LIFE