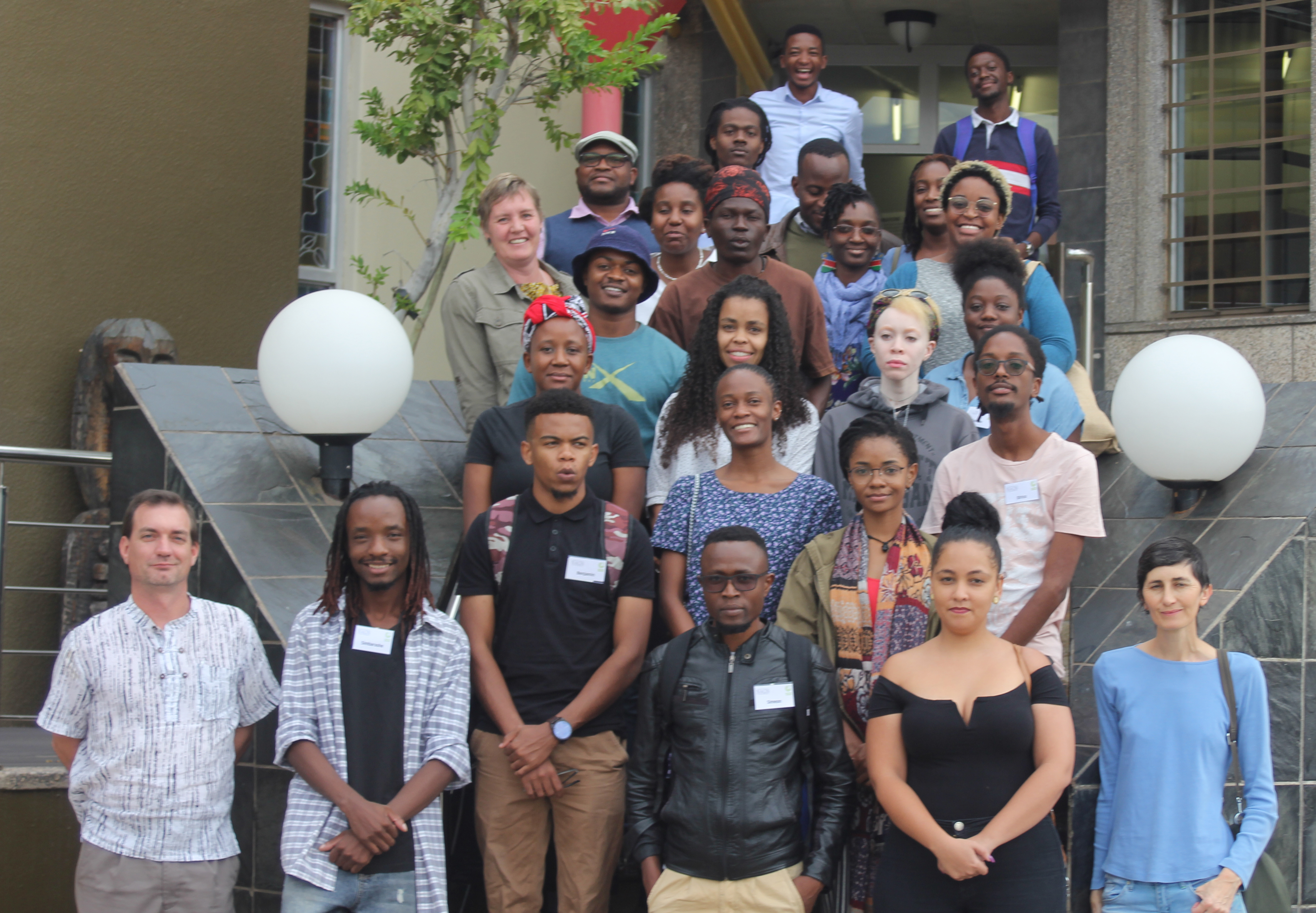 “Namibian artists often do not have the luxury of focusing on their craft as a result of there not being enough curators available, who are qualified.” National Art Gallery of Namibia (NAGN) Curatorial Coordinator, Ndeenda Shivute.

The Goethe-Institut Namibia in collaboration with the NAGN for the first time held a week-long workshop for arts students, graduates and enthusiasts to share skills and learn from qualified curators who have experiences in Namibia, South Africa and Nigeria. Hosted in the NAGN, the approach of combining theory with practice in a gallery setting was chosen because of the important role a curator plays in the functioning of a gallery, museum or arts institution.
“The sudden influx of art graduates has Namibia’s visual arts scene in a dilemma, calling for new approaches to curating,” said Namibia Arts Association Curator, Elize van Huyssteen, who also facilitated at the bootcamp. She explained that as Namibia’s arts scene unfolds and develops, there is a lack of a vision, which makes the profession chaotic at times. “This is when curators are needed to bring the spaces of display to the creators and for them to also create new spaces for the presentation of their work,” she said.

To address the skills gap in the visual arts scene of Namibia, the bootcamp opened with the topic of understanding a curator’s role. The profession is often overlooked and not understood enough to be appreciated in Namibia. “Namibia’s arts sector is fairly small but has grown a lot since independence. This means we are now at a stage where there are many creators but not enough people to get that art from a studio and into a gallery,” said Shivute. The bootcamp encouraged participants to look outside of the ‘white cube’ and understand the creation of spaces outside of official institutions.

“Throughout my years of experience in and out of a gallery, it was always hard to overcome the obstacles and formalities of acquiring space to present my and other artists’ work. As curators, we need to bring these spaces to the artists and have them understand the concepts of creating space, trading, stimulating discourse for education and the simple aspect of entertaining your viewers,” said Huyssteen. This, she explained, highlights the importance of tertiary education in the field of curating, which is easily overlooked. “It is necessary for a person to have a qualification in curating or other areas of humanities for them as a curator to communicate the artist’s message effectively,” she said.

Shivute concurs and said without formal education, a curator will find it difficult to work with an artist and most importantly, understand the subject of their work for it to be presented effectively. “There are people who have managed to create a curating career without the education but I think a good mix of education and experience would yield the best results in a gallery or any space,” she said. Communication is a key concept in curation to manage the collection of a gallery or museum effectively, to the degree of engaging with the public for them to understand and appreciate the craft. An Art Talk during the bootcamp challenged the conventional perception of a curator as developed in Europe and encouraged participants to redefine the role in the context of Africa and the continent’s cultural practices. The stagnation of collections and their lack of fluidity also featured in the discussion. Participants and the public guests agreed that collections can be preserved, as the curator’s role is defined, but can also grow to accommodate new items.

The conceptualisation of an exhibition was also covered during the bootcamp and Huyssteen said without a clear channel of communication between a qualified curator and artist, there is no beginning or end to any show. “Without a well-thought through idea, a curator will not be able to work with artists, institutions and potential sponsors. The way in which an exhibition is conceptualised and laid out, makes it either a remarkable experience or maze a viewer gets lost in,” she said. Huyssteen clarified that the role of a curator is still unknown in Namibia and most persons already in the profession are doing their best with a diploma or higher qualification in visual art – not specifically curating. “Curators are seen as uneducated and unprofessional by the artists and institutions they have to work with or for. I fortunately see a change in this attitude as curators rise and show their expertise, which challenges the negative perception of their profession and the old story of institutions having a limited budget,” she said.

The Art Talk also highlighted the importance for a curator to question the selection of items put on display in a museum or gallery, and what those items communicate about the society they represent. The concept of barriers was also covered in the discussion and how a mundane barrier such as a gallery’s door needs urgent attention, while the brutality of selection behind the door and in the gallery space undermines the expertise of curators and artists.

The last days of the bootcamp required participants to explore the NAGN, other galleries and general public spaces for them to apply the knowledge gained. “We hoped to have given participants the hands-on experience and for them to also be aware of the challenges we face as curators in institutions so that they reflect and develop ways around those challenges, and ultimately bring Namibia’s visual arts more into the eye of the public,” said Shivute.